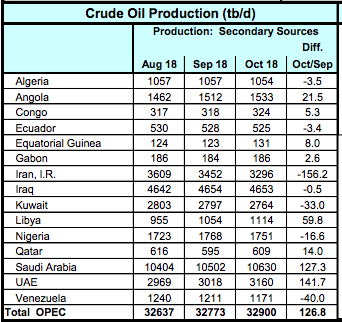 The IEA is revising its 2019 global oil demand growth forecast to 1.1 million barrels per day (bpd) and may cut it again if the global economy and especially China shows further weakness, Fatih Birol said.

Last year, the IEA predicted that 2019 oil demand would grow by 1.5 million bpd but had cut the growth forecast to 1.2 million bpd in June this year.

Luis Angel Hernandez
16/09/19 05:54
The attacks halted 5.7 million barrels per day (bpd) of crude production, more than half of Saudi Arabia’s current output, or more than 5% of global oil supply.
Trump said on Sunday he had authorized a release from the U.S. Strategic Petroleum Reserve (SPR) if needed.
The United States is the world’s top oil consumer and a leading producer. The U.S. SPR, held in underground storage caverns on the Texas and Louisiana coasts, currently contains nearly 645 million barrels, or about the amount the United States consumes in a month.
The United States has another 416.1 million barrels sitting in commercial storage, according to the U.S. Energy Information Administration’s most recent data. Those are held by oil producers, refiners and traders.
Saudi Arabia has said it would use oil in storage to fill tankers for customers. The country has about 188 million barrels in reserve, according to a note on Saturday from Rapidan Energy Group.